With the use of any technology, the value lies in the improvement of processes or providing solutions to problems, rather than technology for technology’s sake. Replacing traditional paper-based construction contracts with smart contracts offers a number of benefits, including increased security and transparency through immutability (i.e. the contract cannot be altered) and automating contractor payments.

Blockchain is the most common method of implementing a smart contract. A smart contract is a technology that sits underneath the contract. The ‘smart’ part refers to the automation process, rather than the use of AI.

Blockchain uses what is known as a distributed ledger, storing blocks of data chained together, in this case, contract details. Each piece of data has a unique hash, essentially a form of digital signature, that is linked to and references other data in the chain. This unique hash also validates the data and prevents alteration.

Once the information has been added to the blockchain, for example, the terms and conditions of a contract, the information cannot be changed. For contracts, data is stored in a decentralised manner, similar to peer-to-peer networks, on a private blockchain, which only parties to the contract can view and which is held on their computers and/or in the cloud.

Accounting for Crises and Price Fluctuations

Immutability is a key strength of smart contracts, but what happens when a crisis such as COVID-19 necessitates changes to the contract? Just as you would for a paper contract, an addendum can be added.

Over the lifetime of long-term construction projects, there can be substantial fluctuations in material prices. Adjusting for changes in prices can be managed through a combination of on-chain and off-chain technologies. Base prices sit in the blockchain and never change, on top of which sits software that calculates changes using price books.

As with other forms of data use, accuracy is dependent on the quality of data. As a side benefit, as the data builds over time, it creates a dataset that can be used for estimating costs and as a quotation tool at quite a granular level. This dataset can cover not only material prices but also estimates based on where the work is carried out and where the materials are sourced from, for example.

Historic data held on the blockchain can also be used to analyse trends and patterns, such as causes of delays, and give indications where potential issues could arise in projects. Blockchain additionally can provide an early warning system for existing contracts of problems on-site, for example, if automated payments aren’t triggered when expected.

“As the data builds over time, it creates a dataset that can be used for estimating costs and as a quotation tool at quite a granular level.”

While blockchain may appear difficult to comprehend, understanding the underlying technology is not a requirement for implementing smart contracts.

While a programmer can turn a paper-based contract into a smart contract, templates are commonly used to enter the contract details to create the smart contract. From an end-user perspective what they see is a form on the screen that they fill out. The way we think about and write contracts will have to have to slightly change to eliminate any vagueness that may exist. For example, inspection and test plans do not always define what conditions need to be hit for payment to be made. However, such improvements will add further clarity to contracts, reducing the likelihood of disputes caused by the lack of clarity.

“Smart contracts are increasingly garnering interest from tier one companies and feeding down into the tier twos."

Smart contacts use If/When and Then statements to automate the payment process. If/When a condition is met e.g., the work is completed and signed off (typically via a computer that then links to the blockchain), Then the payment is made. This reduces the administration burden on the hiring company and reassures the contractor that payment will be made on time upon satisfactory completion.

One area that has sparked interest among construction companies is the use of smart contracts to automate payments on multi-million-pound projects and only drawdown as and when work stages are completed, rather than having to provide a large lump sum upfront. This provides better transparency in respect of tracking payments being made.

Smart contracts mean that terms and conditions are always easily accessible by the parties, which is particularly useful for projects that run for many years. There are no paper copies to get lost or hard drives to fail in the case of digital contracts.

One criticism levelled at blockchain in general is that it is power hungry. While this is true, the technology is improving all the time and becoming more energy efficient.

Smart contracts are increasingly garnering interest from tier one companies and feeding down into the tier twos. At lower levels, the automation of payments can help create buy-in among those who may be technology averse.

Could the solution to enhance collaboration in construction lie in contracting?

For an industry where the successful delivery of a project is dependent on the seamless interplay... 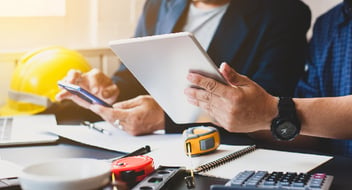 Find out how to save time managing and qualifying subcontractors

9 Things You Need to Do to Win More Government Contracts